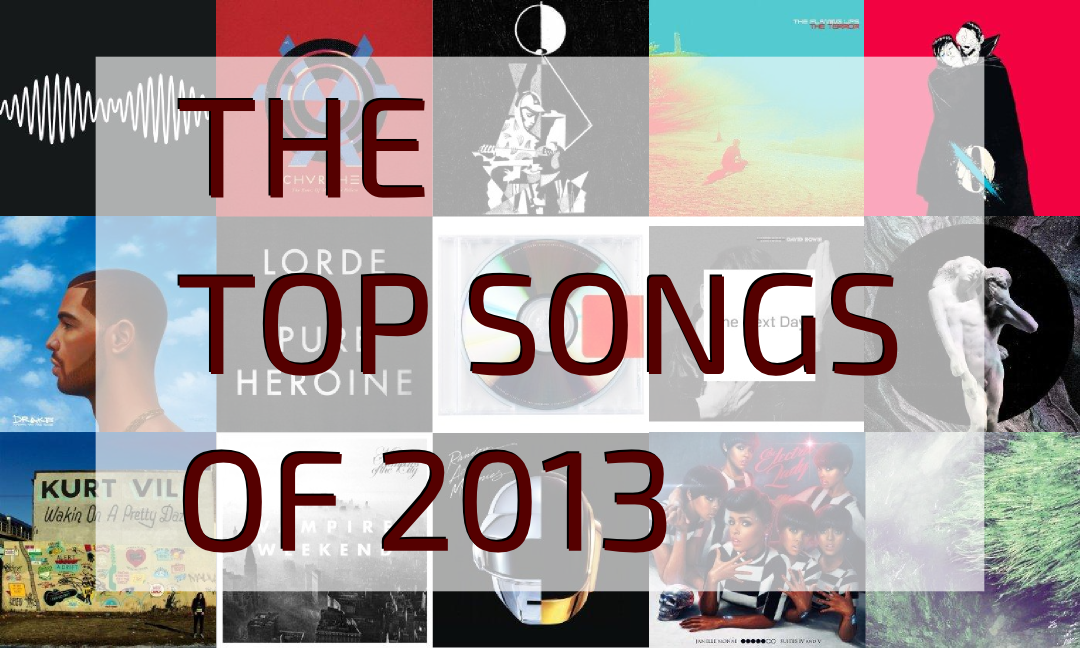 While there have been a few contenders for the most-talked about artist of 2013 (Jay-Z, Lorde, Miley–ok, we’re using this term loosely), it’s been a year where the musical conversation was inevitably came down to Kanye West and Drake. No one has owned the airwaves more than Drake. They guy was simply everywhere before Nothing Was the Same even dropped. The ever-reliable Mr. West has dominated, basically, every other media channel.

Both released strong albums to massive hype, rare feats in their own right. Thematically, Yeezus and Nothing Was the Same are united by their absolute commitment to over-sharing. It’s a strangely suitable end for the year that saw Snapchat and Instagram become the lingua franca of the post-literate generation. These are strange days indeed.

But, as always, there were riches abound for those willing to look and listen. In no particular order, we give you our contributors’ favorite songs of the year. Some were unavoidable, undeniable. Others, borderline unfindable. We collect them here to look back–and also look forward.

Matthew Belair (@14Belair42) grew up on the classic rock of his parents and the 90s alt-rock of his older sister before discovering other genres to love, all of which are cool, hip, and in no way embarrassing to admit publicly.

I really wanted to not like this song, but I can’t keep doing it.

I don’t even sort of feel guilty about liking this song.

I can’t remember the last person I wanted to like and hate so much at the same time.

Jeff Bennet has noted that this may become the “Hey Ya” of it’s time. I agree.

If the XX were more pop, which I’m totally fine with.

The Electric Lady let me down a little, but I still love this song.

2. The Flaming Lips – You Lust

The centerpiece track from my choice for album of the year.

I honestly just now discovered that Matt Jackson and I have the same number 1. I feel tremendous about this.

Jeff Bennet (@JeffBennet) goes with Drake any time someone asks him who his favorite band or artist is, because he has this personality flaw where he needs to be all things to all people.

6. The Knife – Without You My Life Would Be Boring

3. Queens of the Stone Age – Vampyre of Time and Memory

Jalen LeCointe (@JJoyceL) had her hips first shake to mainstream 80's music. Since then, she's developed an ear for many other genres, but still remains an awkward dancer.

8. The Strokes – One Way Trigger

3. Artic Monkeys – Why’d You Only Call Me When You’re High?

Matt Jackson (@YahSureMan) is the Founder of The Daily Soundtrack and Bark Attack Media. He lives in Brooklyn, NY.

The most gleefully offensive song of 2013 features the three most important rappers of 2013 not named Kanye in top form. Also, 2 Chainz in top form (shouting inanities).

9. The Future of the Left – Singing of the Bonesaws

Electro-indie with a bigger heart and/or brain than most. Actually manages to rock.

Not electro-indie, just electronic. Soundtrack to hours spent at my desk.

The happiest I felt while listening to music 2013 was during these 9 short minutes.

I had all but written off Arcade Fire in recent years. “Reflector” continues to grow on me. What a sad song, though.

Just one of those song that makes you feel like a total badass for listening to it. You can strut to this song.

Otterbuss likes to frolic and play in the ocean while listening to his favorite tunes. While swimming for his life to evade an Orca whale or some other predator, he prefers energetic rock or rap. If he's just floating on his back and eating shell fish in the sun, he prefers to just chill and listen to something a little more relaxing.

Through sheer force of will, Macklemore will appear on every best-of list through 2020.

I’d choose their whole new album if I could.

Alex Lupica (@Alex_Soundtrack) has been in love with music since he was a toddler, despite its infidelities. (Really, music? Nu-metal? How could you!). Alex is Editor-in-Chief at The Daily Soundtrack.

As someone who puts almost no stock in the collective worth of the Arcade Fire, Kanye West, or Daft Punk, I basically admit to being the least influential music blogger on the planet. So what are the non-hip listening to these days? Wouldn’t you like to know! In no particular order, some wordy notes on things what struck me this year:

There are some things I’d like to talk to Lorde about (that sounds like a future feature to me), but one thing I can say with certainty is that the girl seems to have a supreme sense of self for her age, and definitely can layer sounds into compelling songs. She deserves a spot simply for being the place where what I enjoyed and what the world enjoyed intersected deepest this year.

I had no idea what this was when it was first spun for me, but I’ll tell you this about that: it drew me in immediately. On paper, you couldn’t sell me on a note of it, from the supremely electro soundscapes to the wispy female vox, but I couldn’t turn away once it invaded my earholes.

Blake Shelton – The Boys Round Here

It’s not that I like this song. I think this song is impossible to like. However, no song has spawned more easy jokes for me this year than the way this track shoehorns every terrible redneck stereotype into one tiny package. Even “Blurred Lines” wasn’t this rich.

Not a song, per se, but the album as a whole basically acts as one. It’s the sort of complete statement that makes you almost drown in it, and indeed Wayne Coyne seems to be drowning frequently, but there is a strange beauty to the whole package, even at its darkest, creepiest and fuzziest. It makes for a terrible track-by-track package, but that’s something I could say about Katy Perry’s “Prism” with equal validity.

David Bowie – If You Can See Me

Similarly, maybe only I have a feeling for relative importance of album releases, but the sheer shock of a new LP from Bowie should have made it a shoe-in for some sort of recognition at this point. Have you even listened to it? If you’ve ever liked what Bowie does, I don’t imagine you’ll be disappointed, as the album traverses basically every Bowie element there is. Here, he is as weird as ever, and still feeling natural at it. We didn’t know we needed it until it happened.

Maybe it says a lot about where my mind is lately, but getting exactly what I expect is exactly what I want in music lately. Our own Matt Belair suggests that Cake is among the greatest bands for this reason. I’d put Eels up against them in the same categories for the same reason, including most distinctive use of beard.

Charles Bradley – Crying in the Chapel

Speaking of which, isn’t it about time for some classic soul revival? I got to see Charles Bradley last year at All Tomorrow’s Parties. He basically burned shit up, all but bleeding on stage, and people responded mightily. He sounds classic because he IS classic, and in a culture in love with nostalgia, that makes him worth his weight in gold. If you’ve needed some warm classic soul in your life, he’s probably worth examining.

Bias, completely, but let’s be honest, this song should comfort my generation on a couple levels. First, it’s a mature, realistic meditation on love, aging and mortality in a world of particular naïveté on those levels. Second, and perhaps most important, it proves that a band can age into AOR without getting overly schlocky. This will be an important rubric as the ‘10s draw on.

Unknown Mortal Orchestra – Swim and Sleep [Like a Shark]

It wouldn’t really be a modern top 10 without some quirky indie echo-pop, would it? These guys keep it dreamy, have just enough shimmer to be basement-ready, and mine some charming if-I-were-an-animal subject matter that should have them popping up all over the blogospheres. They are, right? Am I late on this train? Because I might be.

It is worth noting that, in refreshing my memory of what I’ve missed this year, I stumbled over an album by the group Feed Me called “Calamari Tuesday.” It appears to be basic techno-dance, for those of you who need even more of that after a summer of “Doing it Right,” but even if it was Tuvan Throat Singing, it deserves a mention for being the best combination of Artist and Album of the year. Feed me calamari Tuesday? Feed me calamari anyday, please AND thank you!